I write in this blog because, I can't imagine not having anything shown for 2014. Yes, it's almost the end of 2014, and this is the first post of the year. I've just had one post every year since the beginning, almost, and felt it was important to give an update on rabbits, somewhat.

As of the past few years, we sold completely out of rabbits. Life is crazy and complicated, and busy. I'm at that point in my life where other things have to come first unfortunately. First, my dog show career and breeding program is quite active. Mark is going to school. We are both working full time. We have to move in the next 6 months and hope to buy a farm as amazing as the one we've had the luxury of living on. These things had to be priorities.

In the beginning, not much will change in the land of rabbits. I really would love to get back in again some day. The rabbit hobby is a crazy addiction and it will suck you back in as quick as it spit you out. What I do know, is that my spare time (HA!) is not that large. And because of that, if I want to get back into rabbits in the future, I have to have some good time management laid out. It needs to be an easy chore everyday. So here's what I'm thinking...


I guess that's all of my thoughts for now. In the fall, the next ARBA Convention will be held in Portland, OR. Being from Northern California, this is an insanely close convention. Maybe I'll be ready by then. I really hope so. One thing that is for sure is that I will NOT buy any stock until I have my setup done, and a row of cages completed and ready. Over time I will expand, slowly, and surely. With some intense linebreeding I think I can start small but strong.

First Tris in the box!

I woke up this morning to a really nice Mother's Day treat! My black/orange tri color fuzzy holland, Lil' Bit Farms Karma had her first litter bred to my orange fuzzy holland, thf Saynora's Paxton. I had bred her once before and she had a miss, so I am really pleased to see little wiggles in her box. They were so fat and well fed! Looks like she had 4, 1 a DOA, and looks like there is a peanut in there (with the most pattern of course). For the two "regulars" left, one looks to be a solid orange, and the other a very minimally patterned broken... but I'm thinking the very little black spots are possibly going to be filled in with orange too. So hoping it's a tri! Now to get the other girls having live litters....
Posted by Katie at 7:23 AM No comments:

It's hard starting over.

I have never had this problem before. I ALWAYS had something I could breed. There was always a brood doe in the barn, or a color project I was working on, or something available for me to breed and wait for that next anticipated next generation. Starting over my rabbitry with juniors only has been a painful waiting game.

Luckily, it looks like the first group is just about hitting senior age.

My tri colors will be the first to hit 6 months in the next 3 weeks. I'll do a round of worming and then breed them all. Then a few weeks later, most of my torts will be ready to breed as well. I cannot wait to get the Kagee fuzzies in the nest boxes and on their way. Unfortunately this means some of the rabbits will have to miss some big shows coming up, like the West Coast Classic held in Reno, NV in a few months. I think that will end up being okay. I want to definitely still go to that show though.. it's definitely the best on the West Coast! It is one to not be missed!

Oh, word has it that the AFLRC will be holding their NATIONAL SPECIALTY next year in Reno, NV in conjunction with the WCC shows! YES!!! I cannot wait. Maybe the future babies will be some seniors to enter, and then of course, will make an attempt to breed for some juniors as well. Yay!
Posted by Katie at 4:37 PM No comments:

So after my rant in the previous post, I finally received my shipment of supplies. But, I was missing the j-clip pliers I bought, and all the j-clips that came with the cage parts. Luckily, customer service on the company improved and they paid to Fedex the items to me on a rush. And of course, as nature would have it, the day they arrived a huge multi-day rain storm came too! Mark and I had only about 45 minutes outside of putting stuff together before the rain hit, but at least we have all our PVC cut. Yes, I said PVC. That's because we're putting together something different! Instead of going for the expensive units of metal stackers (like we're talking pretty much $500 for a 6 hole stack nowadays), I decided to build shelving with PVC pipe, attach just the wire cages, and put trays underneath. Doing it this way should (or at least what I figured on paper) save me about 50% of the costs of cages. And the plus side is not only will I be saving a lot of cash, but for the cost ALL of my cages will be 24 x 24 instead of 24 x 18. Very good news! I cannot wait for them all to be built and together. I have lots of hanging toys I have purchased (expensive bird toys I found on clearance at a bargain overstock type of store) that are just waiting to be put inside. The bunnies are just going to LOVE them!

For anyone who's interested, I found the overall plans and measurements (I adjusted the math to fit the size of cages I have), on this blog: http://fmicrofarm.blogspot.com/2012/02/diy-rabbit-cage-rack-tutorial.html

Hopefully pictures of my new setup will come soon! My office furloughs us for a week and a half during Christmas time, so I have all next week off to work on it!!
Posted by Katie at 3:01 PM No comments:

I've been dealing with an order from a well known rabbit cage maker for the last 3 weeks or so, and it's been an utter nightmare.

It first started off by the company not receiving my order, or at least claiming not to. That wasted a few days.

Then after they finally got my order and processed it, I called a week later to check on the order, since I hadn't heard anything. I was told it would ship a few days later, Monday or Tuesday. I called back on Wednesday, no answer. Called again and finally got ahold of someone. Who then told me my order would probably be processed and shipped the following Monday or Tuesday. Which I was told last week. Sigh.

So then I call again that next Wednesday, and no answer, again. So this time I leave a voicemail demanding to know where my order is and that it's been weeks and I have had not had much communication at all regarding my $500 order. So then I get an e-mail instead of a call back, telling me that my order shipped already.

Okay, that's great, except, I never got a quote on the shipping costs for heavy metal cages. And it was supposed to just be sent Fedex but they apparently send it on trasport from some random trucking company they hired to do it.

So I check my credit card statement and see I was charged an extra $160 over my quote/invoice. I'm assuming for shipping. And I was never given any number or contact information for this supposed semi truck delivering metal cage parts to my house. So I just wait until it comes.

Yesterday I get a note on my door that the company tried to deliver the cage stuff. So I called them back and arrange to have it delivered this morning at 7:30am. I'm thankful they left a note with their contact information, or I would have been plain out of luck.

Out of the approximate 8 or so phone calls placed to this company during my timespan, the phone was actually picked up 2 times.

I open up the pallet of supplies today and low and behold, there is no j clips, or j clip pliers to even put the darn thing together.

YAY! I figured out how to import my old Starlite Rabbitry blog over to my new blog! So now you have access here to my old blog posts back to 2007! Such as show results, show pictures, insiders views to Convention, road trips, rabbitry happenings, and more! YAY! So glad I figured out how to do that. Enjoy the reading from the past!
Posted by Katie at 10:55 AM 1 comment:

I couldn't just stop at 4 little tri colors to work on, could I?

My buddies Jenna and Tracy from THF Saynora heard I was back and the game and offered me a beautiful set of fuzzy hollands from probably my most favorite breeding program in the world. I could not pass it up. The day after Thanksgiving I found myself hanging out at the cargo center at the Sacramento airport, awaiting an arrival from Pennsylvania. Six beautiful new fuzzies have joined my herd and I am absolutely THRILLED with how they look! I ended up bringing home all juniors, tort buck, broken tort buck, orange buck, tort doe, and two broken tort does. They are looking just lovely and I can't wait to get them ready to hit the show tables. The THF Saynora breeding program is one of the best in the world in my opinion. Not many breeders have been able to achieve such consistency in a linebreeding program like Jenny and Tracy have. Their hollands can compete on any table anywhere and have a good chance of taking the show. I have always had loads of success with rabbits from them, and so I expect nothing less from this group. Below is a couple pictures (courtesy of Jenna) of some of the new guys. I will get my own updated pictures soon once this terrible weather stops (raining like, what, 4 days straight now?). 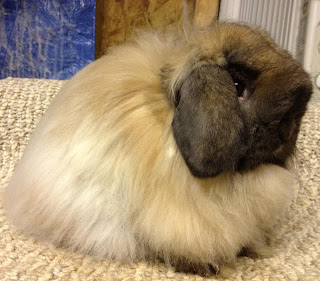 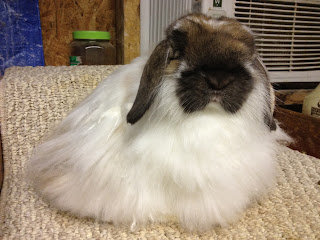 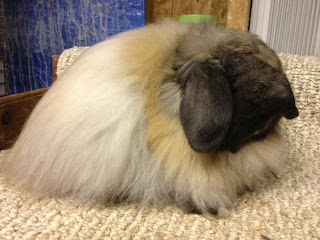 Katie
My name is Katie. I show Border Collies in Northern California.